Where the Ashes Are: The Odyssey of a Vietnamese Family

In 1968 Nguyen Qui Duc was nine years old, his father was a high-ranking civil servant in the South Vietnamese government, and his mother was a school principal. Then the Viet Cong launched their Tet offensive, and the Nguyen family’s comfortable life was destroyed. The author’s father was taken prisoner and marched up the Ho Chi Minh Trail.

North Vietnam’s highest-ranking civilian prisoner, he eventually spent twelve years in captivity, composing poems in his head to maintain his sanity. Nguyen himself escaped from Saigon as North Vietnamese tanks approached in 1975. He came of age as an American teenager, going to school dances and working at a Roy Rogers restaurant, yet yearning for the homeland and parents he had to leave behind. The author’s mother stayed in Vietnam to look after her mentally ill daughter. She endured poverty and “reeducation” until her husband was freed and the Nguyens could reunite.

Intertwining these three stories, Where the Ashes Are shows us the Vietnam War through a child’s eyes, privation after a Communist takeover, and the struggle of new immigrants.

The author, who returned to Vietnam as an American reporter, provides a detailed portrait of the nation as it opened to the West in the early 1990s. Where the Ashes Are closes with Nguyen’s thoughts on being pulled between his adopted country and his homeland.

Be the first to review “Where the Ashes Are: The Odyssey of a Vietnamese Family” Cancel reply 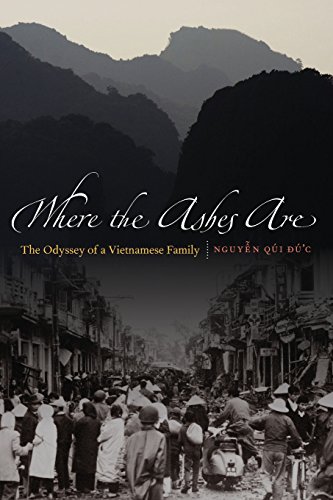 You're viewing: Where the Ashes Are: The Odyssey of a Vietnamese Family
Buy from Amazon