When Heaven and Earth Changed Places

It is said that in war heaven and earth change places not once, but many times. When Heaven and Earth Changed Places is the haunting memoir of a girl on the verge of womanhood in a world turned upside down. The youngest of six children in a close-knit Buddhist family, Le Ly Hayslip was twelve years old when U.S. helicopters langed in Ky La, her tiny village in central Vietnam. As the government and Viet Cong troops fought in and around Ky La, both sides recruited children as spies and saboteurs. Le Ly was one of those children.

Before the age of sixteen, Le Ly had suffered near-starvation, imprisonment, torture, rape, and the deaths of beloved family members-but miraculously held fast to her faith in humanity. And almost twenty years after her escape to America, she was drawn inexorably back to the devastated country and family she left behind. Scenes of this joyous reunion are interwoven with the brutal war years, offering a poignant picture of Vietnam, then and now, and of a courageous woman who experienced the true horror of the Vietnam War-and survived to tell her unforgettable story. 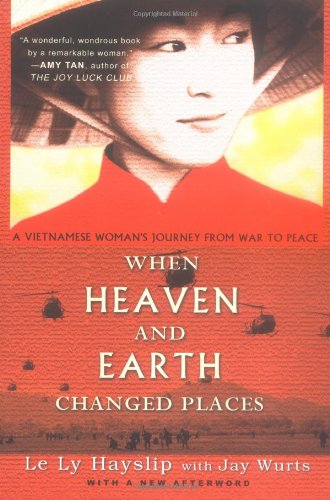 You're viewing: When Heaven and Earth Changed Places
Buy from Amazon