Jonathan Raban’s powerful novel is set in Seattle in 1999, at the height of its infatuation with the virtual. It’s a place that attracts immigrants. One of these is Tom Janeway, a bookish Hungarian-born Englishman who makes his living commenting on American mores on NPR. Another, who calls himself Chick, is a frenetically industrious illegal alien from China who makes his living any way he can.

Through a series of extraordinary but chillingly plausible events, the paths of these newcomers converge. Tom is uprooted from his marriage and must learn to father his endearing eight-year old son part-time. Chick claws his way up from exploited to exploiter. Meanwhile Seattle is troubled by rioting anarchists, vanishing children, and the discovery of an al-Qaeda operative; it is a city on the brink. Savage and tender, visionary and addictively entertaining, Waxwings is a major achievement.

“Jonathan Raban calculates the radius of the Internet bubble with the cool eye of an investor who can spot real value [and] captures this exuberant era with striking efficiency. He prods us to consider that we’re living in a period that makes us all somehow foreigners, desperate for residency.” The Christian Science Monitor

Be the first to review “Waxwings” Cancel reply 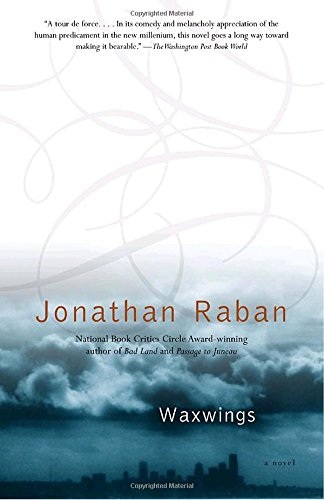 You're viewing: Waxwings
Buy from Amazon