David Brinkley, one of America’s most respected and celebrated news commentators, turns his journalistic skills to a personal account of the tumultuous days of World War II in the sleepy little Southern town that was Washington, D.C.

Carrying us from the first days of the war through Roosevelt’s death and the celebration of VJ Day, Brinkley surrounds us with fascinating people. Here are the charismatic President Roosevelt and the woman spy, code name “Cynthia.” Here, too, are the diplomatic set, new Pentagon officials, and old-line society members — aka “Cave Dwellers” We meet the brashest and the brightest who actually ran the government, and the countless men and women who came to support the war effort in any way they could — all seeking to share in the adventure of their generation.

“HILARIOUS AND INSTRUCTIVE . . . Brinkley has written an impressionist history, comparable to a pointillist painting composed of small points of color that, seen whole, comprise a remarkably truthful record of reality.” The Washington Post

Be the first to review “Washington Goes to War” Cancel reply 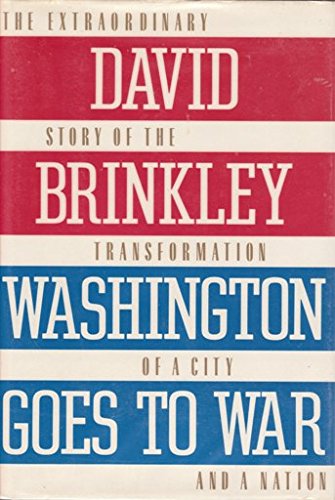 You're viewing: Washington Goes to War
Buy from Amazon