Too Loud a Solitude

Hanta rescues books from the jaws of his compacting press and carries them home. Hrabal, whom Milan Kundera calls “our very best writer today,” celebrates the power and the indestructibility of the written word.

One of Czechoslovakia’s most popular authors, Hrabal ( I Served the King of England ) was never a dissident, nor are his books polemics; he is noted for his visceral, fabulistic prose and bizarre sense of humor. Hanta, the narrator of this absorbing novella, is a gentle alcoholic who has spent 35 years compacting wastepaper.

In his messy, subterranean world, the refuse of human life accumulates: bloody butcher paper, office correspondence, yellowed newspapers and, most importantly, books. Able to quote Kant, Goethe and Seneca, he is both “artist and audience” as he destroys or selects for his own enjoyment the printed matter others have discarded.

Hanta’s unusual occupation–in a country which until recently suffered severe literary censorship–is an ironic backdrop as he reflects on the women he has loved or imaginary encounters between historical figures such as Jesus Christ and Lao-tze.

This fable about the modern-day equivalent of book-burning, although a showcase for Hrabal’s dazzling writing talent, often slides into parody, under the weight of its obtrusive morality.

Be the first to review “Too Loud a Solitude” Cancel reply 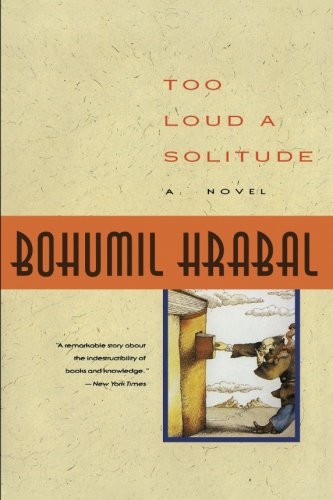 You're viewing: Too Loud a Solitude
Buy from Amazon