The Life and Death of a Spanish Town

The book is set in and around the small town of Santa Eul?ria des Riu, on Ibiza, where Paul had lived since 1931. In the first part of the book Elliot Paul describes the town and many of the characters who live and work there. He details their family lives, their hopes, their aspirations, and their politics. He provides details of the people at work and at play, and describes how he becomes part of the community of the town.

Paul also writes of other ex-patriates who have made their homes in and around the town. Part two starts with Paul and his family returning to Ibiza, after some time away.

The narrative is set in 1936 in the week leading up to the outbreak of hostilities on Ibiza during the Spanish Civil War and describes the events that eventually lead to Paul, his family and other refugees from the violence, fleeing the island. It tells the story of civil disobedience, collaboration and the violence that split a once-happy community, although the narrative finishes before the tragic turn of events reaches its conclusion.

The postscript, written by Paul, dated 14 June 1937, details events following his departure from Ibiza and describes his hopes and fears for his friends on the island and a way of life that he thought would change for ever.

In this rare and vivid document, Paul captures the upheaval that shattered lives before he and his wife had
to flee. 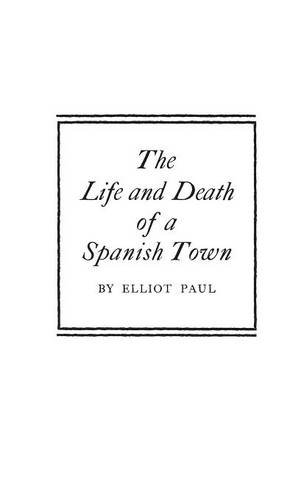 You're viewing: The Life and Death of a Spanish Town
Buy from Amazon