The Factory of Light: Tales from My Andalucian Village

Searching for a house to rent in 1999, Michael Jacobs was offered one in the Andalucian olive-growing community of Frailes. This was a place where the modern world enjoyed a strange co-existence with a virgin Andalucia ruled by a dynasty of saintly healers. It was not long before he decided to take up more permanent residence above the Discoteca Oh!

As he shared in each season’s special events, Michael’s life became increasingly tied up with this village threatened by drought, unemployment, and decreasing population. He was taken under the wing of El Sereno, an elderly Romeo, while his friendship with the village social worker Merce – a woman who held court in a bar situated inside a cave – led him deeper into a miraculous world. Miracles were needed to save the place; and miracles began happening. With his dream of inviting a legendary Spanish actress to the village’s abandoned Art Deco cinema, the truly unimaginable occurred, and the name of Frailes became known even to Hollywood.

Be the first to review “The Factory of Light: Tales from My Andalucian Village” Cancel reply 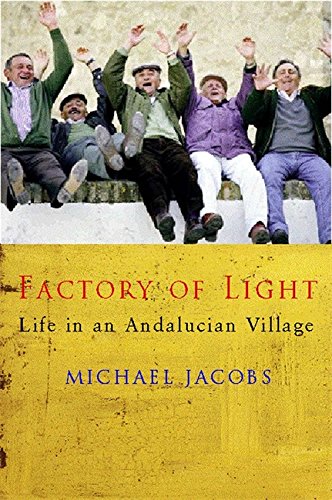 You're viewing: The Factory of Light: Tales from My Andalucian Village
Buy from Amazon