The Eaves of Heaven: A Life in Three Wars

From Andrew X. Pham, the award-winning author of Catfish and Mandala, a son’s searing memoir of his Vietnamese father’s experiences over the course of three wars.

The Philadelphia Inquirer hailed Andrew Pham’s debut, Catfish and Mandala: A Two-Wheeled Voyage Through the Landscape and Memory of Vietnam, for evoking “the full sadness of the human condition . . . marveling at spiritual resilience amid irreconcilable facts.” The New York Times Book Review called it, simply, “remarkable.” Now, in The Eaves of Heaven, Pham gives voice to his father’s unique experience in an unforgettable story of war and remembrance.

Once wealthy landowners, Thong Van Pham’s family was shattered by the tumultuous events of the twentieth century: the festering French occupation of Indochina, the Japanese invasion during World War II, and the Vietnam War.

Told in dazzling chapters that alternate between events in the past and those closer to the present, The Eaves of Heaven brilliantly re-creates the trials of everyday life in Vietnam as endured by one man, from the fall of Hanoi and the collapse of French colonialism to the frenzied evacuation of Saigon.

Pham offers a rare portal into a lost world as he chronicles Thong Van Pham’s heartbreaks, triumphs, and bizarre reversals of fortune, whether as a South Vietnamese soldier pinned down by enemy fire, a prisoner of the North Vietnamese under brutal interrogation, or a refugee desperately trying to escape Vietnam after the last American helicopter has abandoned Saigon.

This is the story of a man caught in the maelstrom of twentieth-century politics, a gripping memoir told with the urgency of a wartime dispatch by a writer of surpassing talent.

Be the first to review “The Eaves of Heaven: A Life in Three Wars” Cancel reply 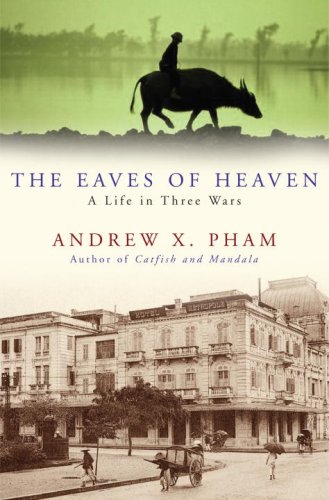 You're viewing: The Eaves of Heaven: A Life in Three Wars
Buy from Amazon