The City of Marvels

Eduardo Mendoza’s extraordinary novel fictionalises the teeming life of the city between the Universal Expositions of 1888 and 1929.

The City of Marvels is a historical fiction Spanish novel written by Eduardo Mendoza Garriga in 1986 about the city of Barcelona and its cultural evolution during the turn of the 20th century. Its central character, Onofre Bouvila, represents a lower class character and their collective ideology.

The protagonist of the story is Onofre Bouvila, a man who grows up in a small rural town in Catalonia. As a child, he sees his father leave the town for Cuba to become rich. Although he sends letters on his voyage, the letters soon stop. Many years later his father returns and appears to have accumulated great wealth. Soon, the family learns that he was unsuccessful and borrowed money from the mafia in Barcelona to purchase a suit.

Years later, Onofre travels to Barcelona in order to find a job. He finds an inn that is run by a father along with his daughter Delfina. As Onofre finds himself unable to get work, Delfina helps him by introducing him to a group of anarchists. His job becomes the distribution of anarchist pamphlets which puts him at odds with the city officials and the guards.

Be the first to review “The City of Marvels” Cancel reply 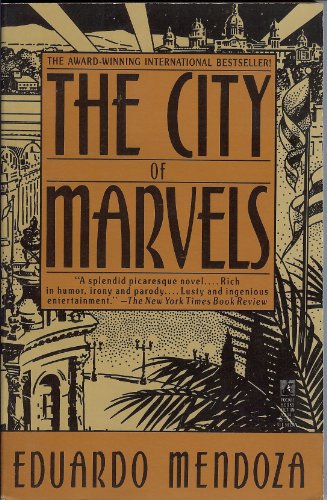 You're viewing: The City of Marvels
Buy from Amazon