Sonchai Jitpleecheep-the brash and beguiling Royal Thai Police Force detective who has been our guide through John Burdett’s five previous acclaimed Bangkok novels-is back. The former monk and devout Buddhist, forever battling to protect his karma from the assaults of morally compromising cases, is now faced with the most horrifying technological innovation to make its way to the streets of Bangkok, and a conspiracy of almost unfathomable reach.

With Sonchai on this case is the young female inspector Krom. Like Sonchai, she’s an outsider on the police force, but unlike him, she is socially savvy and a technological prodigy. When they’re called to a demonstration-in the midst of a typhoon-of the deadly, superhuman strength of an American man who is seemingly controlled by a CIA operative, they have no idea what they’re actually witnessing or why. Their reliably obtuse and unequivocally crooked boss, Colonel Vikorn, explains some of it, but the most telling questions remain unanswered: Could the Americans have figured out a way to create a physically and psychologically enhanced supersoldier? Are they testing him-or it-on Thai soil? And why is everyone, from the Bangkok police to the international community, so eager to turn a blind eye?

Searching for the answers to these questions, Sonchai and Krom find themselves in a remote Cambodian jungle compound for aging American ex-soldiers, where they will discover just how far a government will go to protect its worst secrets-both past and present. But the case will also have much more personal repercussions for Sonchai, shaking his world to its very foundation and perhaps finally forcing him to confront his long-lost American father.

“Burdett’s fever-dream mysteries, set in Bangkok, recast the police procedural as psychedelic peep show. . . . written with such louche authority that, by the end, one cheers the seemingly infinite multiplicity of Burdett’s universe.” The New Yorker

Be the first to review “The Bangkok Asset: A Royal Thai Detective Novel” Cancel reply 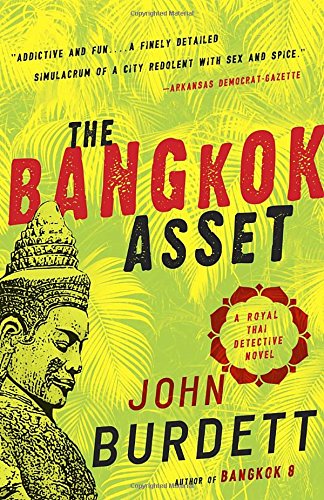 You're viewing: The Bangkok Asset: A Royal Thai Detective Novel
Buy from Amazon