The Anatomy of a Moment: Thirty-Five Minutes in History and Imagination

In February 1981, Spain was still emerging from Franco’s shadow, holding a democratic vote for the new prime minister. On the day of the vote in Parliament, while the session was being filmed by TV cameras, a band of right-wing soldiers burst in with automatic weapons, ordering everyone to get down. Only three men defied the order. For thirty-five minutes, as the cameras rolled, they stayed in their seats.

Critically adored novelist Javier Cercas originally set out to write a novel about this pivotal moment, but determined it had already gained an air of myth, or, through the annual broadcast of video clips, had at least acquired the fictional taint of reality television. Cercas turned to nonfiction, and his vivid descriptions of the archival footage frame a narrative that traverses the line between history and art, creating a daring new account of this watershed moment in modern Spanish history.

The Anatomy of a Moment caused a sensation upon its publication in Spain, selling hundreds of thousands of copies. The story will be new to many American readers, but the book stands resolutely on its own as a compelling literary inquest of national myth, personal memory, political spectacle, and reality itself.

Be the first to review “The Anatomy of a Moment: Thirty-Five Minutes in History and Imagination” Cancel reply 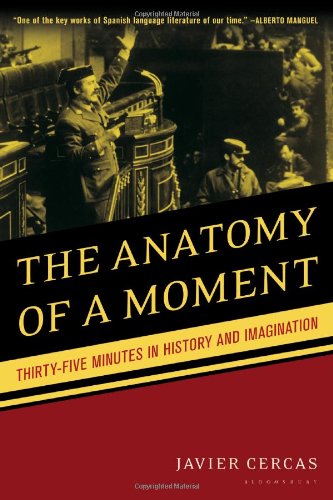 You're viewing: The Anatomy of a Moment: Thirty-Five Minutes in History and Imagination
Buy from Amazon