Something in the Air: American Passion and Defiance in the 1968 Mexico City Olympics

IN SOMETHING IN THE AIR, Richard Hoffer has written a gripping sports narrative that brilliantly tells the individual stories of the unforgettable athletes who gathered in Mexico City in 1968, a year of dramatic upheaval around the world.
Those Olympics caught the revolutionary spirit of the times. In these pages, Hoffer captures the turbulence and offbeat heroism of that historic Olympiad, which was as rich in inspiring moments as it was drenched in political and racial tension. This was a year that saw the assassinations of Martin Luther King Jr. and Robert F. Kennedy; racial rioting in the nation’s big cities; the upheaval at the Democratic National Convention in Chicago; growing revulsion toward the war in Vietnam; an inspiring bid for freedom in Czechoslovakia, which was crushed by Soviet tanks; and student demonstrations seemingly everywhere, including, fatefully, in Mexico City itself.

Racial tensions were high on the U.S. Olympic team, where inflamed black athletes had to choose between demands for justice on one hand and loyalty to country on the other. No one had easy choices.

Although the basketball star Lew Alcindor (later to become the great Kareem Abdul-Jabbar) decided not to participate, heavyweight boxer George Foreman not only competed and won a gold medal, but waved a miniature American flag at foreign judges. The sprinters Tommie Smith and John Carlos became as famous for their raised-fist gestures of protest as their speed on the track. No one was prepared for Bob Beamon’s long jump, which broke the world record by a staggering twenty-two inches. And then there was Dick Fosbury, the goofball high jumper whose backward, upside-down approach to the bar (the “Fosbury Flop”) baffled his coaches while breaking records. Though Fosbury was his own man, he was apolitical and easygoing. He didn’t defy authority; he defied gravity.

These were a complicated Olympics — no longer a reliably reassuring sporting event, a respite from world events. Not only was the 1968 Olympics a forum for youthful protest, it was a platform for the lingering racism that divided a nation. The generational contest that was working itself out in the culture back home was exploding in Mexico City. Everything was up for grabs. Professionalism was suddenly overtaking this last outpost of amateurism, the media was piggybacking a newly inflated spectacle, nations tussled as usual for international attention. And all the while, a bunch of kids were pitting their interests against the world’s, weighing performance against politics, in one of the most exciting sporting events of the twentieth century.

Witty, insightful, and filled with human drama, Something in the Air mixes Shakespearean complexity with Hollywood sentimentality, sociopolitical significance, and the exhilarating spectacle of youthful physical prowess. It is a powerful, unforgettable tale that will resonate with sports fans and readers of social history alike.

Be the first to review “Something in the Air: American Passion and Defiance in the 1968 Mexico City Olympics” Cancel reply 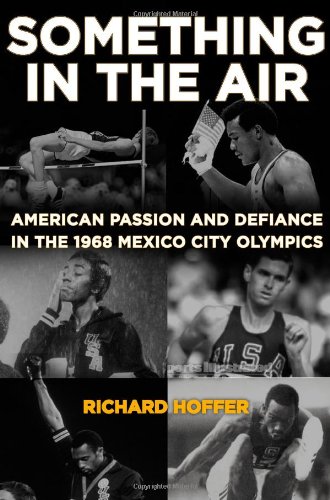 You're viewing: Something in the Air: American Passion and Defiance in the 1968 Mexico City Olympics
Buy from Amazon