Award-Winning Finalist in the Fiction: Multicultural category of the 2012 International Book Awards

Mimi (the protagonist of Mimi and Her Mirror) is a successful young Vietnamese immigrant practicing law in Washington, D.C. when the postcards begin to arrive.

Postmarked from Thailand, each hand-drawn card is beautifully rendered and signed simply “Nam.” Mimi doesn’t recognize the name, but Nam obviously knows her well, spurring her to launch what will become a decade-long quest to find him. As her search progresses, long-repressed memories begin to bubble to the surface: her childhood in 1970s Vietnam in a small alley in pre-Communist Saigon.

Back then, who was her best friend as well as her brother’s playmate, and what did art have anything to do with the alleys of her childhood? What was the dream of these children then? What happened when these children were separated by the end of the Vietnam war, their lives diverged onto different paths: one to freedom and opportunity, the other to tragedy and pain?

Now Mimi must uncover the mystery of the postcards, including what might have happened to the people who where less fortunate: those who escaped the ravaged homeland by boat after the fall of Saigon. When the mystery is solved, Mimi has to make a resolution: what can possibly reunite the children from the alley of her childhood even when the alley exists no more?

Be the first to review “Postcards from Nam” Cancel reply 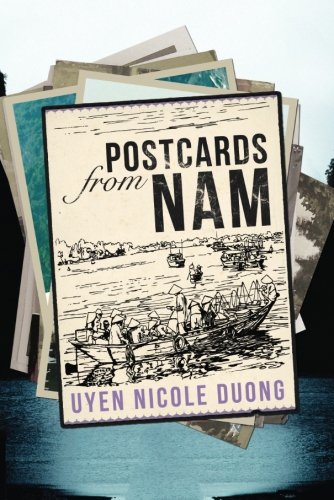 You're viewing: Postcards from Nam
Buy from Amazon