“One of the most intriguing and appealing character studies in recent European fiction, and easily the best work of Tabucchi’s to have appeared in English translation.”-Kirkus Reviews

Dr. Pereira is an aging, overweight journalist who has failed to notice the menacing cloud of fascism over Salazarist Portugal, until one day he meets an aspiring young writer and anti-fascist. Breaking out of his apolitical torpor, Pereira reluctantly rises to heroism.

Set in the sweltering summer of 1938 in Portugal, a country under the Fascist shadow of its neighbor, Spain, Italian author Tabucchi’s movingly restrained novel tells a tale of quiet, reluctant heroism. Dr. Peirera, the overweight, middle-aged editor of the cultural page of a second-rate Lisbon newspaper, wants nothing to do with European politics. He’s happy to translate 19th-century French stories and write droll pieces commemorating famous authors and, in general, is content to believe “that literature was the most important thing in the world.” His closest confidante is a photograph of his late wife.

All this changes, however, when he meets Francesco Monteiro Rossi, a brash and oddly charismatic young subversive. As Pereira tells his wife’s photo, Rossi is “about the age of our son if we’d had a son.” Pereira gives Rossi work preparing obituaries for still-living writers; but Rossi focuses on the wrong writers or lingers on the political implications of their lives. “Completely unpublishable,” is Pereira’s usual response. And yet, he continues to pay Rossi, even after discovering that the young man is using the money to recruit for the anti-Franco International Brigade.

The narrative gathers its strange power-a sense of administrative, banality-of-evil dread-from a simple device: it’s told by an unnamed interlocutor and appears to be the report of a government official to a superior.

Be the first to review “Pereira Declares: A Testimony” Cancel reply 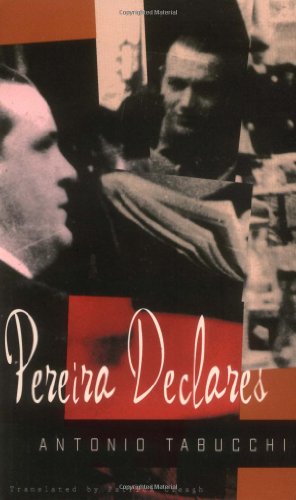 You're viewing: Pereira Declares: A Testimony
Buy from Amazon