Once in Kazakhstan: The Snow Leopard Emerges

Soon after the disintegration of the Soviet Union, Keith Rosten leaves the United States to be a Fulbright Lecturer in newly-independentKazakhstan.

In Once in Kazakhstan, Rosten draws a sometimes humorous portrait of a critical period in the emergenceof this Central Asian country, interweaving the challenges and exhilaration of living in Kazakhstan with the historical backdrop of a nation grappling with its independence.

From horse heads in the Central Market, to guns on the ski slopes, and to the first-ever parliamentary elections, Rosten takesyou on a whirlwind tour of the country. He vividly recounts the change in currency from the Soviet ruble to the tenge and travelswith a candidate for parliament to a rural village near Semipalatinsk.

Using his knowledge of local language and customs, Rostenprovides access to native sources on the history, politics, traditions, and spirit of Kazakhstan. Complete with photographs of thepeople, places, and monuments of the country, Once in Kazakhstanis an invaluable resource for anyone who is interested in learningmore about, or traveling to, the fascinating landscape of this emerging nation.

Be the first to review “Once in Kazakhstan: The Snow Leopard Emerges” Cancel reply 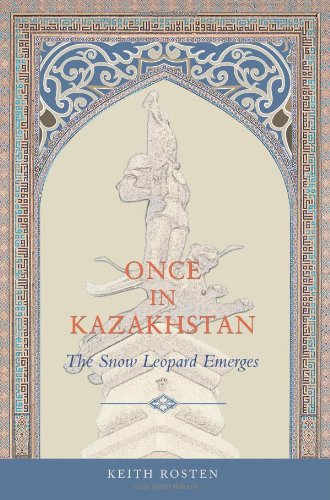 You're viewing: Once in Kazakhstan: The Snow Leopard Emerges
Buy from Amazon