Freedom Rising is a fresh, intensely human account of how the Civil War transformed the nation’s capital from the debating forum for a loose union of states into the seat of a forceful central government.

Before 1861, Washington was a dusty, muddy city of 60,000, joked about by urban sophisticates from New York and Boston. But at the onset of war, thousands of soldiers, job seekers, nurses, good-time girls, gamblers, newly freed slaves-all kinds of Americans-poured in. For days, Washington was cut off from the North, and no one was sure whether it would become the capital of the Union or the Confederacy.

Ernest Furgurson-author of the widely acclaimed Chancellorsville 1863, Ashes of Glory, and Not War but Murder-tells the story through the men and women who brought the city to rambunctious life. He re-creates historic figures such as William Seward, who fancied himself Abraham Lincoln’s prime minister; poet Walt Whitman, who nursed the wounded; and detective Allan Pinkerton, who tracked down Southern sympathizers; and he introduces intriguing others, such as Mayor James Berret, arrested for disloyalty; architect Thomas Walter, striving to finish the Capitol dome in the middle of war; and accused Confederate spy Antonia Ford, romancing her captor, Union Major Joseph Willard, operator of the capital’s premier hotel. Here is Mary Lincoln, mourning the death of her son Willie, seeking solace from fakers who conducted s?ances in the White House. And here is the president-in all his compassion, determination, and complexity-inspiring the nation, wrangling with generals, pardoning deserters, and barely escaping death on the ramparts of Fort Stevens as Jubal Early’s Southern army invades the outskirts of Washington and fights the Union Army within five miles of the White House. For four years, the city was awash in drama and sometimes comedy, until the assassination of Lincoln by John Wilkes Booth became the tragedy of the century.

By the time the grand two-day victory parade of 150,000 troops surged along Pennsylvania Avenue, the men and women who had arrived in such great numbers at the start of the war had made Washington a capital to be reckoned with throughout the world. Freedom Rising is an invaluable aid to understanding the making of America.

Be the first to review “Freedom Rising: Washington in the Civil War” Cancel reply 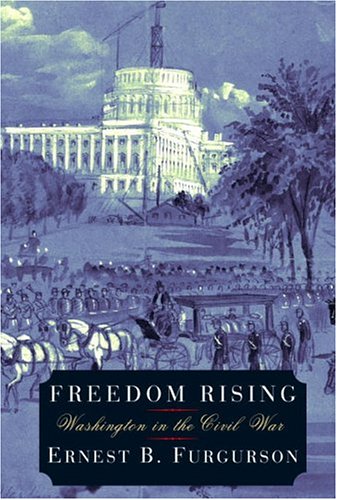 You're viewing: Freedom Rising: Washington in the Civil War
Buy from Amazon