Fire in the Lake: The Vietnamese and the Americans in Vietnam

Fire in the Lake is a book by American journalist Frances FitzGerald about Vietnam, its history and national character, and the United States warfare there.

The book was ranked by critics as one of the top books of the year, it was on the New York Times bestseller list for more than 10 weeks, and it won the Pulitzer Prize for General Non-Fiction.

This was the first major book by an American on Vietnam, its history, and the United States activities there.

FitzGerald said it was a “first draft of history.” She explored thousands of years of the history and culture of Vietnam, showing how these affected the relations of its peoples with the relatively brief encounter with the United States. She says that the US understood little about the country and its leaders, reacting to the threat of communism rather than recognizing the nation’s long struggle to gain and keep its independence from foreign invaders.

Be the first to review “Fire in the Lake: The Vietnamese and the Americans in Vietnam” Cancel reply 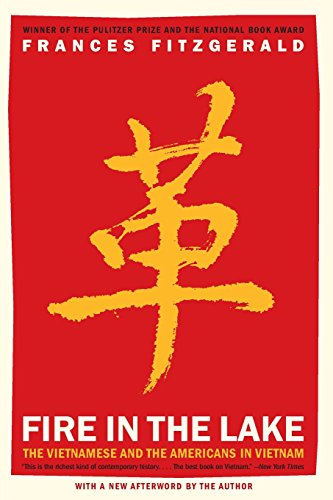 You're viewing: Fire in the Lake: The Vietnamese and the Americans in Vietnam
Buy from Amazon