A “colorful family saga” set against the dramatic historical backdrop of twentieth-century Puerto Rico, from an author nominated for the National Book Award (Kirkus Reviews).

Elvira Vernet narrates Eccentric Neighborhoods as she attempts to solve the mystery of who her parents truly are. Her mother, the beautiful and aristocratic Clarissa Rivas de Santillana, was born into a rarefied world of privilege, one of five daughters on the family’s sugar plantation. Elvira’s father, Aurelio Vernet, and his three brothers and two sisters were raised by Santiago, a Cuban immigrant who ruled his family with an iron hand. As Puerto Rico struggles for independence-and Aurelio takes his place among the powerful political gentry-a legacy of violence, infidelity, faith, and sacrifice is born.

Set against the backdrop of a country coming of age, Eccentric Neighborhoods is a lush, transcendent novel, a family saga about mothers and daughters, husbands and wives, parents and children. In this magnificent follow-up to The House on the Lagoon, Rosario Ferre delivers a work of historical fiction influenced by magical realism and infused with forgiveness and love.

Be the first to review “Eccentric Neighborhoods” Cancel reply 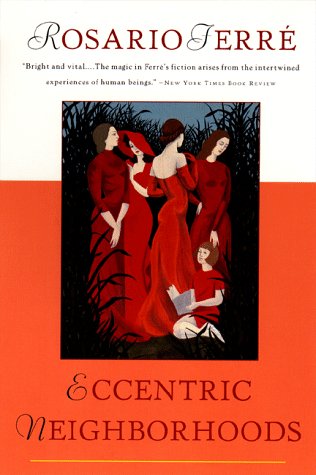