The narrator and protagonist of the story, Hermann Karlovich, a Russian of German descent and owner of a chocolate factory, meets a homeless man in the city of Prague, whom he believes is his doppelg?nger. Even though Felix, the supposed doppelg?nger, is seemingly unaware of their resemblance, Hermann insists that their likeness is most striking.

Hermann is married to Lydia, a sometimes silly and forgetful wife (according to Hermann) who has a cousin named Ardalion. It is heavily hinted that Lydia and Ardalion are, in fact, lovers, although Hermann continually stresses how much Lydia loves him. On one occasion Hermann actually walks in on the pair, naked, but Hermann appears to be completely oblivious of the situation, perhaps deliberately so.

After some time, Hermann shares with Felix a plan for both of them to profit off their shared likeness by having Felix briefly pretend to be Hermann. But after Felix is disguised as Hermann, Hermann kills Felix in order to collect the insurance money on Hermann on March 9. Hermann considers the presumably perfect murder plot to be a work of art rather than a scheme to gain money.

But as it turns out, there is no resemblance whatsoever between the two men, the murder is not ‘perfect’, and the murderer is about to be captured by the police in a small hotel in France, where he is hiding. Hermann who is writing the narrative switches to a diary mode at the very end just before his captivity, the last entry is on April 1.

Despair is the seventh novel by Vladimir Nabokov, originally published in Russian, serially in the politicized literary journal Sovremennye zapiski during 1934. Most copies of the 1937 English edition were destroyed by German bombs during World War II; only a few copies remain. Nabokov published a second English translation in 1965; this is now the only English translation in print.

Be the first to review “Despair” Cancel reply 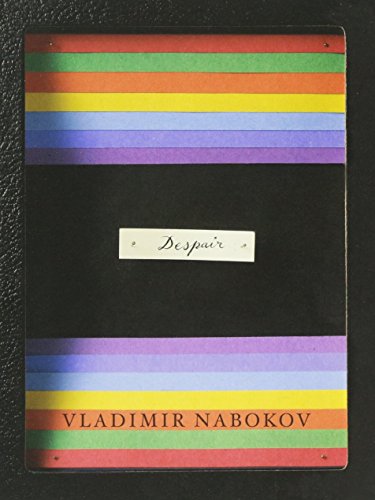 You're viewing: Despair
Buy from Amazon