A dazzling cultural excavation of one of the world’s greatest cities–from its ancient beginnings, through the heights of medieval splendor, to the present day–by a gifted writer who has spent much of his life in Cairo.

The seat of pharaohs and sultans, the prize of conquerors from Alexander to Napoleon, Cairo has never stopped reinventing itself. Even in this century, as Max Rodenbeck shows us, the city has transformed itself yet again–from a glamorous European outpost into the nationalistic capital of the Arab world.

And, most recently, we have been witness to contemporary Cairo grappling with a population explosion that strains every aspect of city life beyond capacity. From its vantage atop the plateau of Giza, the Sphinx has witnessed it all: forty-five centuries of a city evolving on the river plain below it. “The Victorious” is what Arabs call Cairo, and its indomitable spirit still merits the name.

To this richly textured story Rodenbeck brings a keen eye for telling detail, gained from years of wandering Cairo’s markets, chatting in its caf?s, and burrowing in its dusty libraries. From the hashish dens to the salons of contemporary Cairo, Rodenbeck explores the city’s stark contrasts. Ancient tombs abut skyscrapers and genteel colonial mansions, and the people, pulled between the cultural poles of Paris and Mecca, struggle with the double burden of an incomparably rich past and a challenging future.

With wit and an understanding that comes from a deep-seated love of the place, Rodenbeck brings Cairo to life in all its chaotic beauty. Fusing the excitement of travel with the stimulation of history, Cairo: The City Victorious is an epic, resonant work.

Be the first to review “Cairo: The City Victorious” Cancel reply 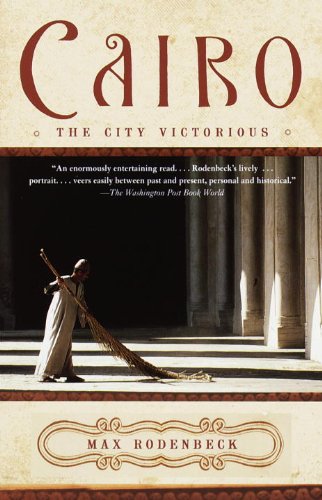 You're viewing: Cairo: The City Victorious
Buy from Amazon