By Night Under the Stone Bridge

Rudolf II, king of Bohemia and Holy Roman Emperor, is paranoid, spendthrift, and wayward. In sixteenth-century Prague, seat of Christendom, he rules over an empty treasury and a court of parasites and schemers.

Meanwhile in the ghetto, the Great Rabbi, mystic and seer, guides his people in the uneasy cohabitation of Jew and Christian, while the fabulously wealthy financier Mordechai Meisl has a hand in transactions across Europe and is reputed to be sustaining the treasury. His beautiful wife, Esther, forms a link of a different sort between the castle and the ghetto: by night under the stone bridge, she and the emperor entwine in their dreams under the guise of a white rosemary bush and a red rose. Only by severing the two plants can the Great Rabbi break the spell of forbidden love and deliver the city from the wrath of God.

Perutz brings Old Prague to life with a cast of characters ranging from alchemists to the angel Asael, and including the likes of Johannes Kepler and the outlaw prince Wallenstein.

First published in 1953, this magical historical novel ostensibly describes the series of events which led to Bohemia’s defeat by Austria at the Battle of the White Mountain in the 16th century. But the Czech emigre author was probably inspired by the events of the Holocaust, so expertly does he re-create the uneasy alliances of Prague’s Jewish and Catholic communities. 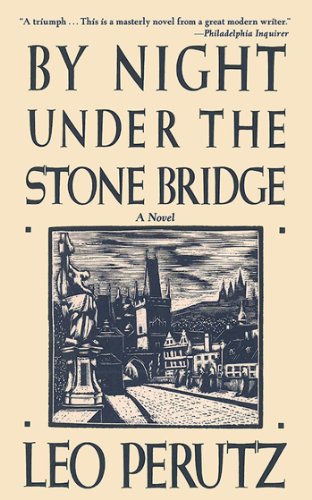 You're viewing: By Night Under the Stone Bridge
Buy from Amazon