Kenton’s career as a journalist depended on his facility with languages, his knowledge of European politics, and his quick judgment. Where his judgment sometimes failed him was in his personal life. When he finds himself on a train bound for Austria with insufficient funds after a bad night of gambling, he jumps at the chance to earn a fee to help a refugee smuggle securities across the border.

He soon discovers that the documents he holds have a more than monetary value, and that European politics has more twists and turns than the most convoluted newspaper account.

ERIC AMBLER (1909-1998) is widely regarded as the greatest writer of suspense stories in the English language, and as the inventor of the modern political thriller. His first novel was published in 1936 and he rapidly established a reputation as a thriller writer of extraordinary depth and originality. Ambler was described by John Le Carre as ‘the source on which we all draw’. He was also an Oscar-nominated Hollywood scriptwriter.

Be the first to review “Background to Danger” Cancel reply 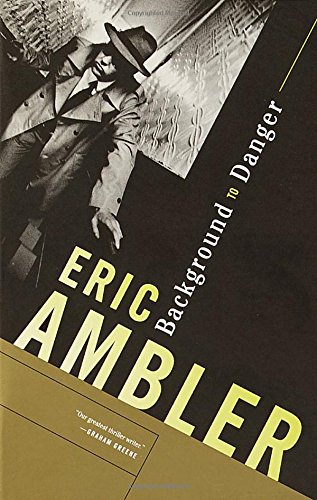 You're viewing: Background to Danger
Buy from Amazon