Apples Are from Kazakhstan: The Land that Disappeared

A funny and revealing travelogue of Kazakhstan, a country rich with wild tulips, oil, nomads who hunt with golden eagles, and a disappearing landlocked sea.

Closed to foreigners under Tsar and Soviet rule, Kazakhstan has remained largely hidden from the world, a remarkable feat for a country the size of Western Europe. Few would guess that Kazakhstan-a blank in Westerners’ collective geography-turns out to be diverse, tolerant, and surprisingly modern, the country that gave the world apples, trousers, and even, perhaps, King Arthur.

Christopher Robbins enjoyed unprecedented access to the Kazakh president while crafting this travelogue, and he relates a story by turns hilarious and grim. He finds Eminem-worship by a shrinking Aral Sea, hears the Kazakh John Lennon play in a dusty desert town, joins nomads hunting eagles, eats boiled sheep’s head (a delicacy), and explores some of the most beautiful, unspoiled places on earth. Observant and culturally attuned, Robbins is a master stylist in the tradition of travel writing as literature, a companion to V. S. Naipaul and Paul Theroux. 39 black-and-white illustrations

Be the first to review “Apples Are from Kazakhstan: The Land that Disappeared” Cancel reply 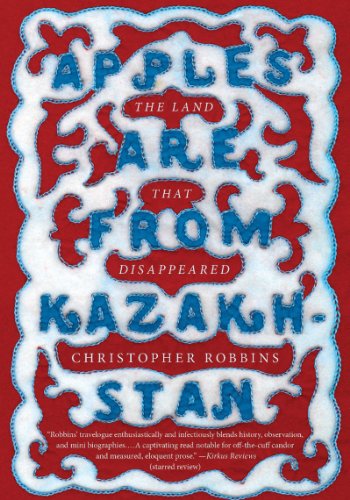 You're viewing: Apples Are from Kazakhstan: The Land that Disappeared
Buy from Amazon