Rodrigo likes his vacant lot, its resident chicken, and being left alone. But when passivity finds him accidentally married to Cecilia, he trades Mexico City for the sun-bleached desolation of his hometown and domestic life with Cecilia for the debauched company of a poet, a philosopher, and Micaela, whose allure includes the promise of time travel. Earthy, playful, and sly, Among Strange Victims is a psychedelic ode to the pleasures of not measuring up.

“The novel takes some bizarre turns as Marcelo leads Rodrigo into experiments involving drugs, tequila, hypnosis and more, all in the name of transformation. If the young man’s notion of radical change is to take part in his life rather than observe it from afar, he’s off to a good start.” The New York Times

Daniel Saldana Paris (born Mexico City, 1984) is an essayist, poet, and novelist whose work has been translated into English, French, and Swedish and anthologized, most recently in Mexico20: New Voices, Old Traditions, published in the United Kingdom by Pushkin Press. Among Strange Victims is his first novel to appear in the United States. He lives in Montreal, Quebec.

Be the first to review “Among Strange Victims” Cancel reply 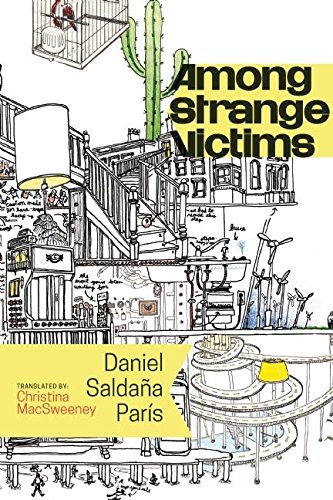 You're viewing: Among Strange Victims
Buy from Amazon