How music provided hope in one of the world’s darkest times-the inspirational life story of Alice Herz-Sommer, the oldest living Holocaust survivor

Alice Herz-Sommer was born in Prague in 1903. A talented pianist from a very early age, she became famous throughout Europe; but, as the Nazis rose to power, her world crumbled. In 1942, her mother was deported to the Theresienstadt concentration camp and vanished. In 1943, Alice, her husband and their six-year-old son were sent there, too.

In the midst of horror, music, especially Chopin’s Etudes, was Alice’s salvation. Theresienstadt was a “show camp”, a living slice of Nazi propaganda created to convince outsiders that the Jews were being treated humanely. In more than a hundred concerts, Alice gave her fellow prisoners hope in a time of suffering. Written with the cooperation of Alice Herz-Sommer, Melissa Müller and Reinhard Piechocki’s Alice’s Piano is the first time her story has been told.

At 107 years old, she continues to play her piano in London and bring hope to many.

Be the first to review “Alice’s Piano: The Life of Alice Herz-Sommer” Cancel reply 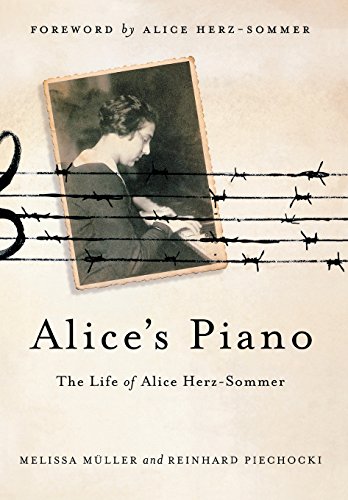 You're viewing: Alice’s Piano: The Life of Alice Herz-Sommer
Buy from Amazon