A Voice from Old New York: A Memoir of My Youth

At the time of his death, Louis Auchincloss-enemy of bores, self-pity, and gossip less than fresh-had just finished taking on a subject he had long avoided: himself. His memoir confirms that, despite the spark of his fiction, Auchincloss himself was the most entertaining character he has created.

No traitor to his class but occasionally its critic, he returns us to his Society which was, he maintains, less interesting than its members admitted. You may differ as he unfurls his life with dignity, summoning his family (particularly his father who suffered from depression and forgave him for hating sports) and intimates. Brooke Astor and her circle are here, along with glimpses of Jacqueline Onassis. Most memorable, though, is his way with those outside the salon: the cranky maid; the maiden aunt, perpetually out of place; the less-than-well-born boy who threw himself from a window over a woman and a man.

Be the first to review “A Voice from Old New York: A Memoir of My Youth” Cancel reply 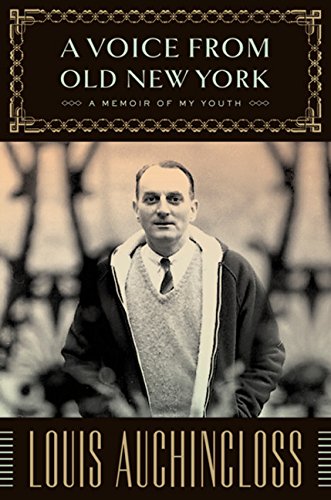 You're viewing: A Voice from Old New York: A Memoir of My Youth
Buy from Amazon