A Simple Act of Violence

R. J. Ellory’s latest paperback is his most timely, menacing serial killer novel yet, and a Publishers Weekly Best Book of the Year. As in his globally acclaimed A Quiet Belief in Angels, it is a stunning work of suspense guaranteed to keep the reader awake at night. Set in Washington, embroiled in elections, it follows Detective Robert Miller as he is assigned to an unsettling murder case. He finds a serious complication: the victims do not officially exist. Their personal details do not register on any known systems. And as Miller unearths ever more disturbing facts, he starts to face truths about the corrupt world he lives in –truths so far removed from his own reality that he begins to fear for his life.

As CrimeSquad described it, “this is a book with everything that a fan of modern mystery fiction could hope for: a labyrinthine plot, unbearable tension, controversy, and a social conscience.”

“A beautifully written novel that is also a great mystery.” James Patterson 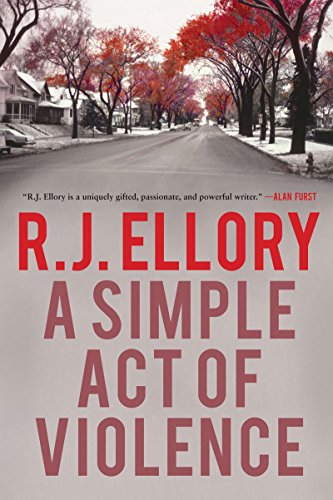 You're viewing: A Simple Act of Violence
Buy from Amazon