Novelist Clare Dudman, whose work has earned comparisons to Andrea Barrett and Peter H?eg, is that rare kind of author who manages to bring history dramatically to life. In 98 Reasons for Being, she conjures up the revolutionary nineteenth-century German physician Heinrich Hoffmann, best known today for his famous book of children’s rhymes, Struwwelpeter, or Shockheaded Peter.

In 1850s Frankfurt, a Jewish girl named Hannah Meyer is admitted to the town asylum; she hasn’t spoken, slept, or eaten in weeks and wagging tongues have resulted in a diagnosis of nymphomania. In an increasingly obsessed effort to cure her, Dr. Hoffmann uses all the methods at his disposal-from ice packs and blood letting to electrodes. Nothing works until he resorts to talking-revealing the fascinating case histories of his other patients as well as his own troubled home life. Only then does Hannah begin to respond and gradually yield her tale of love, transgression, and prejudice. As the secrets hidden in Hannah’s mind are exposed, Hoffmann begins to uncover his own buried truths and, in the end, discover his real reasons for being.

Brilliantly composed with a keen sense of German and Jewish history, 98 Reasons for Being is written with the intensity of D. M. Thomas’s The White Hotel and confirms Dudman’s reputation as a gifted storyteller.

“An unsettling, weirdly evocative novel, evidently superbly researched … the novel’s images of the dawn of modern psychiatry and its portrait of doctor and patient struggling together towards the light remain memorably poignant.” Times Literary Supplement

Be the first to review “98 Reasons for Being” Cancel reply 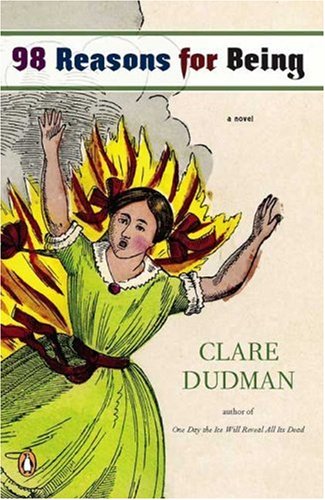 You're viewing: 98 Reasons for Being
Buy from Amazon